ASUS TUF Gaming VG279Q1A is one of the most exciting gaming monitors with 27" FullHD IPS panel and high refresh rate for a very adequate price. The monitor boasts high-quality and contrast picture with a very decent default calibration, frequency up to 165 Hz, support for ELMB, Adaptive-Sync and FreeSync Premium technologies, an appropriate set of interfaces, as well as a stylish, yet versatile appearance. So you get all the basic gamer's essentials. The only minor complaints are the slight backlight bleeding on the edges of the screen and the stand with restricted adjustment abilities. 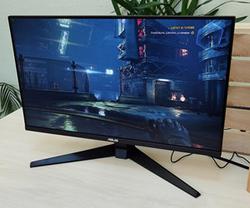 2 reasons not to buy the ASUS TUF Gaming VG279Q1A:

What's in the package?

The ASUS TUF Gaming VG279Q1A comes in a large box with the familiar black and gray design in the TUF Gaming range style. There is a picture of the monitor and all the basic technical specifications on the package. Together with the monitor you will find in the package HDMI and DisplayPort cables (they didn't come to our editorial office, but still available), a compact external power supply, a power cable and a set of documentation.

What does the ASUS TUF Gaming VG279Q1A look like?

ASUS emphasizes usability rather than flashy, eye-catching design in the TUF Gaming series. The ASUS TUF Gaming VG279Q1A under test has little evidence of a gaming focus. The only hint of it is the massive arrow-shaped stand. Otherwise, it is a typical modern monitor with a so-called frameless design: the screen and the gaps on three sides are under the overall cover. Only at the bottom there is a small plastic edge with the ASUS logo.

The stand has impressive dimensions. Its frame is made of metal for greater stability. The outside is a functional matte plastic. The stand has a hole for cable management, and the stand itself can rotate 15° to either side relative to the stand.

The entire back is made of similar matte black plastic. At the top there''s a large ASUS logo, with the TUF Gaming range logo just below. It is located on the panel, with black plugs around the perimeter. Under them you'll find the VESA 100x100 holes to attach the monitor to the wall. Unlike most monitors where the stand is attached to the same VESA pad, the TUF Gaming VG279Q1A has a stand screwed slightly lower. From the additional functional elements on the back panel we can also highlight the slot for Kensington Lock in the lower right corner.

The monitor is relatively thin and finding a place for it will be no big deal:

The control panel is located in the lower left corner of the back panel. It is similar to all other ASUS gaming models: a five-position joystick, under which there are four massive buttons. Signs are placed on the side edge against the buttons as a cheat sheet.

The panel with ports is traditionally directed downwards and placed to the left of the stand mount. We will talk about the set of ports a little later. Slightly to the left, on the beveled platform there is one of the built-in stereo speakers (the second one, respectively, is on the other side).

There is a small white LED on the bottom right which can be turned off in the on-screen menu in case it is distracting.

There are no complaints about the build quality: the parts fit well, the monitor does not squeak or crunch. The appearance is versatile: ASUS TUF Gaming VG279Q1A will look quite natural even in the office.

What about usability, settings, and connectors?

There is a jack for the power supply, one DisplayPort 1.2, a standard 3.5mm audio jack for a headset, and two HDMI 1.4 ports on the panel with connectors. In this case 2.0 (and even more so 2.1) is not a big deal: HDMI 1.4 supports FullHD up to 144 Hz. And we have FullHD up to 165 Hz. The maximum frequency is supported when connected via DisplayPort.

And – to rotate the monitor 15° to each side. That's all. And if the rotation to the portrait position is not that important, especially for the gaming model, the height adjustment would have been rather useful.

Button and joystick controls are implemented similar to other ASUS models. The joystick is responsible for menu navigation and confirmation. The buttons below are the cancel button (also displays button function designations), two reassignable function buttons, and the power button. By default, the first function button is assigned to the GamePlus settings section (sight display, zoom, FPS-counter, timer), the second button is assigned to switch the GameVisual image modes.

Now let's move on to the Menu.

Through the function buttons you can get to the quick settings for switching GameVisual picture modes and additional GamePlus functions. Namely, the screen sight, the FPS counter, the timer and the screen alignment utility.

The main menu consists of 6 submenus:

The ASUS TUF Gaming VG279Q1A has an 8-bit 27-inch IPS panel with FullHD resolution. Unfortunately, we could not find the exact model and manufacturer. W-LED backlighting is used, the maximum refresh rate is 165 Hz, and the minimum pixel response time is 1 ms MPRT (Motion Picture Response Time), 3 ms (gray to gray, GtG). This is quite impressive figures for an affordable model. The maximum declared brightness is 250 cd/m², which is generally enough for indoor use. But HDR, of course, is not supported.

The picture on the ASUS TUF Gaming VG279Q1A is very satisfying: the viewing angles are maximum, both horizontally and vertically. The glow effect is almost invisible, and the contrast drop is very small. The only minor issue is the uniformity of the backlighting: there are small highlights on the edges of the screen. Although in everyday use they are noticeable only in a dark room when displaying a dark background.

The tests were done in four modes with complete resetting of the monitor to default settings. The colorimeter measurements showed that the screen is very well calibrated, only in the cinematographic mode there were deviations. In Racing mode the brightness was 268.287 cd/m² (even a little higher than the claimed figure), the brightness of the black field was 0.281 cd/m², and the static contrast ratio was 955:1. Color rendering is also good: the color gamut is almost the same as sRGB, color temperature is between 6500 and 7000K, and the overabundance of blue is minimal. The average color error ΔE is 2.68.

In FPS mode the brightness is a little higher: 271.301 cd/m², and the curves in the graphs are even closer to the reference values, the color temperature is about 6500K:

In sRGB mode, the indicators are very similar, the exception is the brightness, which is fixed at 132.012 cd/m², which will not be enough in bright ambient light.

Only the Cinema mode is different. There is a significant overabundance of blue and a relatively small lack of red. As a result, the picture is "cold", the color temperature is close to 10 000K, the brightness is 186.973 cd/m².

The monitor's arsenal includes a number of useful features and capabilities for gaming. The aforementioned ELMB (Extreme Low Motion Blur), which reduces blur in dynamic scenes by inserting a black frame. The technology does work, but also has the reverse side, which is to reduce brightness to a level that is already comfortable only in a dark room.

The monitor supports Adaptive-Sync with NVIDIA GeForce 10, GTX 16, RTX 20 series graphics cards, as well as FreeSync Premium. As written above, low frame rate compensation (LFC) and a refresh rate of at least 120 Hz at Full HD resolution have been added to the specification. LFC works as follows: if the frequency in the game is below the required minimum, some frames are duplicated to get a stable FPS.

With these features as well as a high-quality and fast matrix, ASUS TUF Gaming VG279Q1A shows excellent performance in games.

We played DOOM Eternal, CS:GO, Call of Duty: Black Ops Cold War, Ghostrunner, Gears 5: games that are especially demanding for sharp and fast visuals. No complaints during the game, no noticeable artifacts, plumes or rips are not observed.

3 things to know about the ASUS TUF Gaming VG279Q1A: